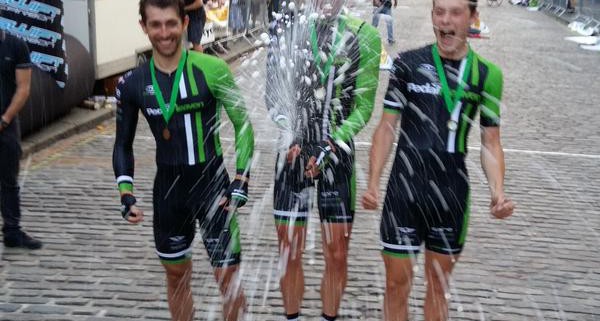 Alex Paton claimed victory at the Guildford Town Centre Criterium on Wednesday after lapping the whole field. A report below talks us through how it happened.

With a lot of the team, having raced the Tour series and now the start of the Elite Crits, it was great to know we would be racing at a local event.  The Guildford crit is a race that each year as a team we try to attend. A great circuit, tough racing, a huge crowd and a very well organised event.

The race was a good quality field with some good completion on this very fast and short circuit. The cobbled climb is brutal enough a few times, but with lap times well under a minute it was going to become most rider’s worst nightmare.  As a team, our plan was to race at the front and make it as tough as possible.  Last year Gruff and I lapping the entire field!  This year we wanted to be greedy and take the top 3 places.  A tough ask, but very possible with the strength of the team this year.

Straight from the gun, the pace rocketed with Rory hitting the front and driving on.  Initially it was myself, Gruff, Luke Ryan and Richie Mardle that held the front of the race.  However only a few laps in and Rory and I had gained a small advantage of the rest of the race.

The blistering pace had almost destroyed the field with small groups forming.  As rory and I looked to extend our lead, he unfortunately had a problem and had to change bikes.  After initially backing off for a couple of laps and hoping rory would re-join me, I decided to really attack the race solo and gradually started to build a lead to the chasers.

As the race progressed, my lead and the 3 chasers behind gap started to increase and by half distance, I and the chase trio had lapped the majority of the race.  Unfortunately the fast start had taken its toll on Dave and Will who didn’t manage to make the lead groups. Max however was in the main group and doing a great job.

I eventually came round to lap the chase group of Rory, gruff and Luke and managed to ride clear again taking Rory with me.  From then in we rode a strong pace to the finish with Rory sprinting to the line ahead of me.  A great fun event, made even better by the fact that Pedal Heaven claimed 1, 2, 3 and 6 on the night.

Anyone who has yet to race or see the event doesn’t know what they are missing!  A race with an atmosphere as good as any Tour Series or Elite Circuit race in the UK.

McGowan sits in 3rd in the Elite Crit Series