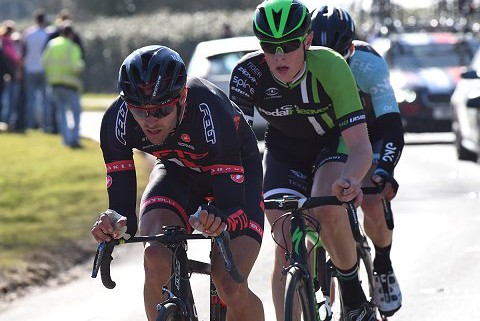 Rory Townsend rode with class to take third overall behind Steel Von Hoff and Yanto Barker at last weekend’s Jock Wadley Memorial RR. Rory has written a report to explain how the race went from his view.

Tank, DC, Mitch, Stevie, Holty and I rolled out for the 33rd edition of the prestigious Jock Wadley road race. The 145km race took place in Colchester on a rolling, 12 lap course.

The race bought strong teams out from their winter training, JLT Condor, One Pro and NFTO all had the full complement of six riders and we knew any break containing numbers from those teams would probably stick.

The race started slowly compared to what we’ve been used to late. However the attacks soon came after a lap or so, Mitch and Stevie were doing a great job following the moves whilst I sat back with Holty for cover. DC and Tank were present at the front as always, keeping a watchful eye out.

The decisive move began with approximately 4 laps to go. The front of the peloton began to fracture in the crosswinds over the reservoir. I attacked from the middle of the pack while sheltered from the wind taking a Condor JLT rider with me.

After a minute or so of chasing, we got across to the leaders making a group of 11.  This included two riders from each of the three major teams. We worked well together, riding through and off. Not far behind the group, Stevie was stuck in no-man’s land trying to get across. He held us for lap but couldn’t make it, riding against the full force of the breakaway. In the peloton, the chase subsided and before long we had a commanding lead of almost 8 minutes.

With four laps to go, the attacks started from the One Pro duo of Marcin and Yanto, possibly trying to drop the riders sitting on. A three man move went containing a rider from each of the main teams, I sat back and fortunately they were soon brought back. I then got into the counter move, along with the same three teams. At one point we had a minute lead, so I was surprised when the group behind came back to us!

Yanto attacked up the hill with about 3 and a half laps to go, taking Steel von Hoff (NFTO).  I jumped across the gap to join them. The three of us took equal turns, and established a decent lead. Von Hoff is well known for his sprint ability after winning a stage at this year’s Tour Down Under, and Yanto wasn’t keen on taking him to the line; with 1 lap to go, Yanto kicked off the attacks , Steele caught up to him and then attacked putting me further behind.

Their game of cat and mouse continued allowing me to catch up. I realisedI was going to have to settle for third, and rode the majority of the last lap on the front.

With approximately 2km to go, the games started again and it became more of a track sprint than a road finale. Marcin was chasing behind and there wasn’t much time to mess around from my perspective, so I hit them hard and briefly had a gap, Steele chased back on and attacked over the top, showing his World Tour quality in going clear and taking the win. I followed Yanto in with Marcin not far behind.

In the bunch sprint, DC produced a great ride to get 11th overall, finishing just behind One Pros Jon Mould. Tank also finished within the top 20, with the rest of the team coming home safely in the bunch.

Very happy with what was possibly my best ever result!

Great to be showing off the Pedal Heaven jersey at the front of the big races!